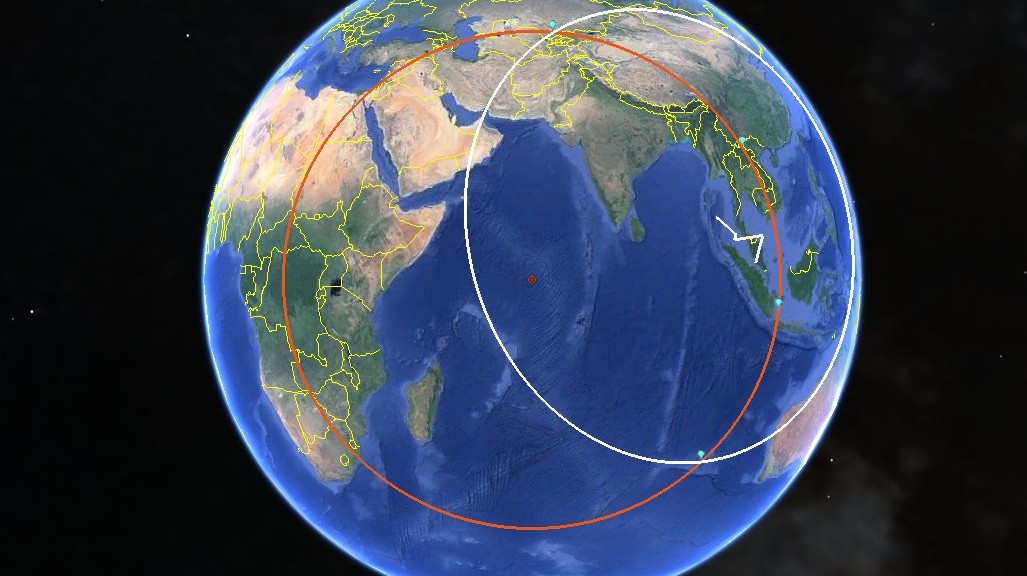 [UPDATE March 22: I have updated the KMZ file for Google Earth to show the latest imagery released by China, pinpointing another possible peace of debris from MH370. I’ve now also added the imagery itself to the placemark’s info box.]

[UPDATE March 20: Here is the KMZ file for Google Earth showing the exact location of those two artifacts (BBC News) noticed on satellite imagery taken by DigitalGlobe on March 16.  (On casual inspection, they look to me to be sun reflections off slightly bigger-than-average waves.) If this is indeed the missing MH370, they are  further south than the final ping arc and estimated range circle — and that would be because MH370 could have kept on flying for up to another hour after the final ping, because of the currents, as these images were taken 8 days after when MH370 would have crashed, and perhaps because the fuel reserves lasted longer than thought.] 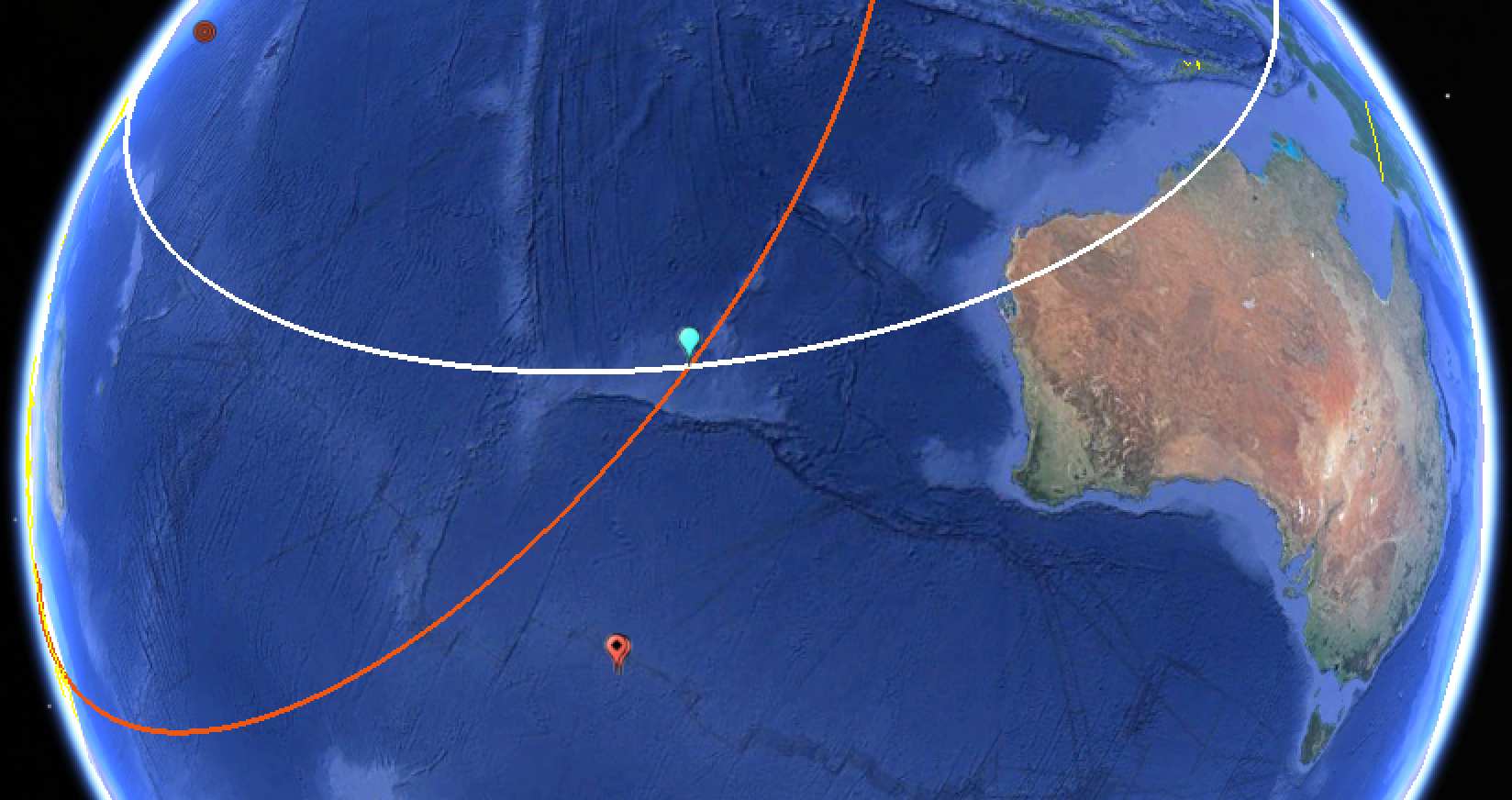 The disappearance of Malaysian Airlines flight MH370 has had me glued to the Internet. Now over a week into the mystery, more specific data has begun to emerge regarding MH370’s apparent flight path and possible last locations, from two distinct sources. I felt I could contribute by adding these as accurately as possible to Google Earth, for others to use. Here’s the resulting KMZ file for Google Earth. Read on for the context.

The most recent source of data was released on March 15, from an Inmarsat satellite in geostationary orbit above the Indian Ocean, which tracked a final ping from MH370 to an arc of possible locations on Earth. The information, released by the Malaysian government, did the rounds of Twitter (and the NYT) in this form: 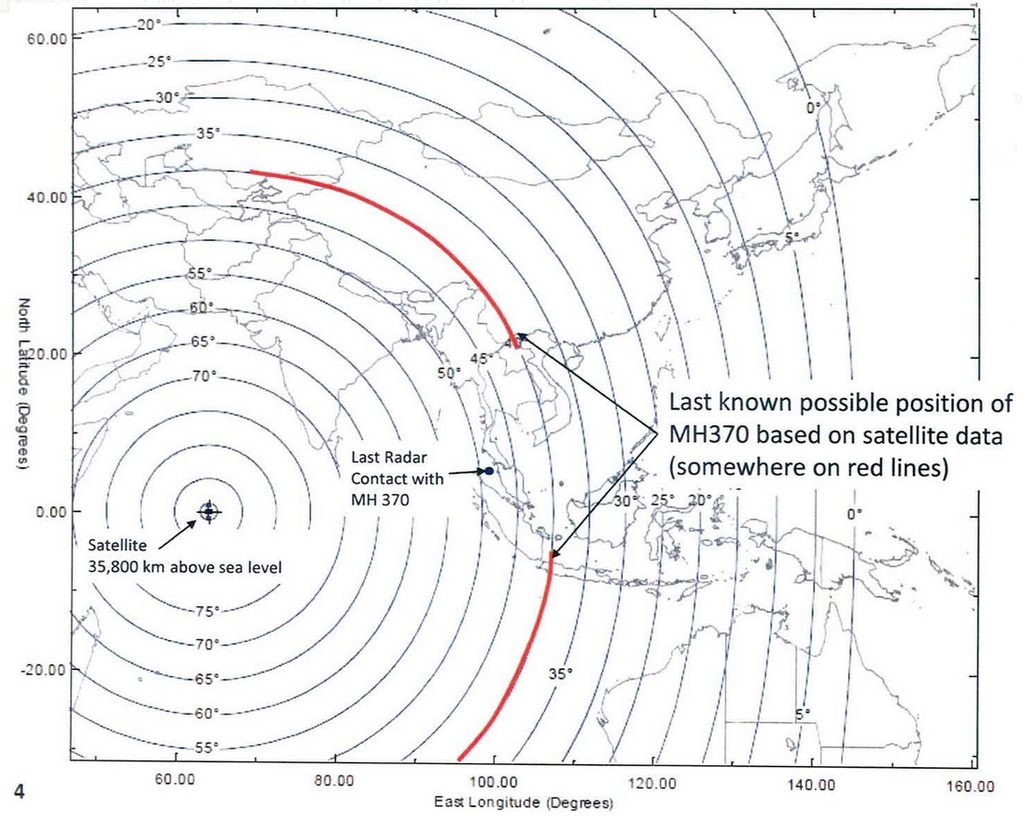 (According to the experts on the Professional Pilots’ Rumour Network, the degree lines shown in the diagram depict how high above the horizon the satellite is when viewed from that location. That’s why right below the satellite the angle is 90°.)

Looking up possible Inmarsat satellites on Wikipedia led to one exact match: Inmarsat-3 F1, which sits 35,700km above the equator at E64.5°. This is the exact view that satellite has of Earth: 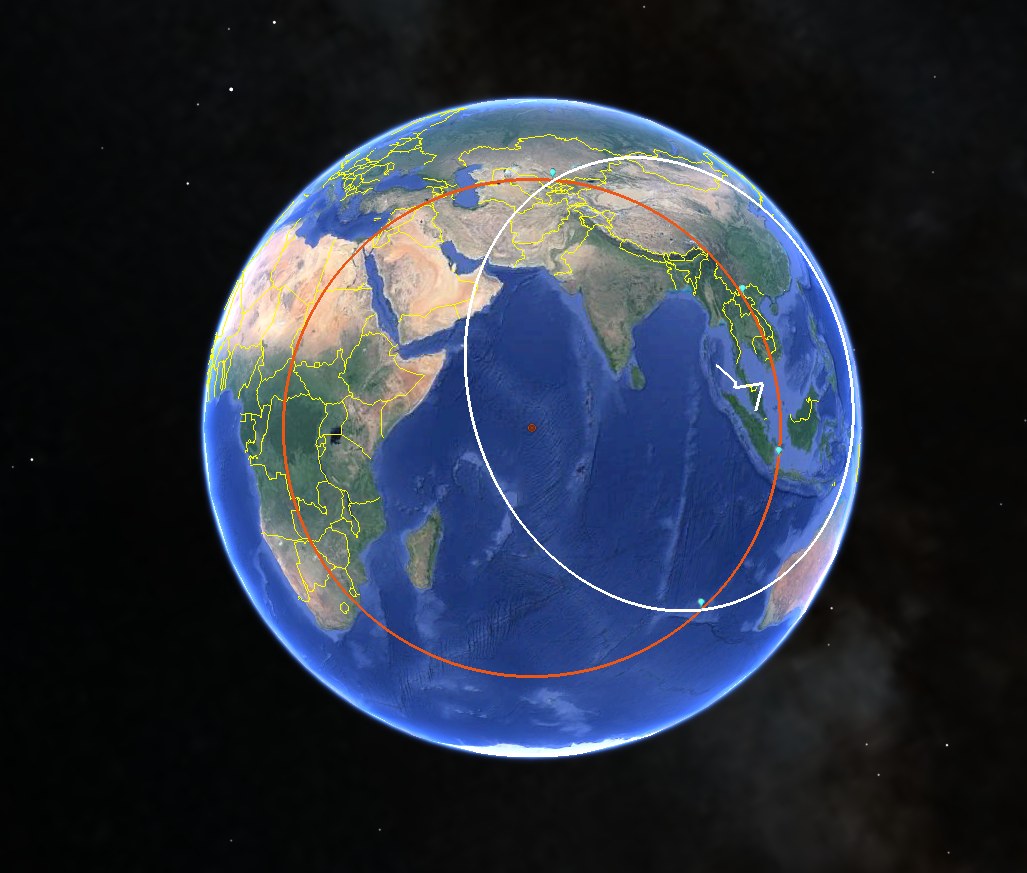 Using this KML circle generator, I then recreated the circle from the diagram (in orange in Google Earth), which turns out to have a radius of 4,750km.  I also added the points demarcating the start and end of the two arc lengths, as depicted on the diagram.

On March 14, sources described to Reuters the details of Malaysian military radar data, which saw MH370 follow specific waypoints as it veered across the Malaysian peninsula and then set course for the Andaman and Nicobar Islands, before going out of radar range.

The coordinates for these waypoints (and some amazing maps to go with them) can be found on SkyVector:

I then converted these to decimal degrees before adding them to Google Earth.

To these coordinates, we can of course add the coordinates of KUL, Kuala Lumpur International Airport (N2.73° E101.71°) and also the last recorded position of MH370 on Flight Aware, a public flight tracking service, which placed the plane almost exactly half-way between KUL and IGARI. These six points together allow us to reconstruct the flight path for the first two hours or so, depicted as a path in Google Earth.

Finally, I’ve added a second circle (in white on Google Earth): This circle has the IGREX waypoint as its center, and it bisect the two furthest points on the two Inmarsat arcs depicted in the diagram. That circle’s radius turns out to be 4,400km. Given the cruising speed of a Boeing 777-200 at 905km/h, that circle depicts the distance MH370 would have flown in just under 5 hours from there (assuming a straight line).

As new information becomes available, I will try to update this post as well as the KML file.

UPDATE March 17, 17:45 UTC: As per this blog post on TMF associates, the interruption in the arc near the Gulf of Thailand is due to the Malaysian government’s own calculations that MH370 flying at its slowest possible speed in a straight line would not be in this region. This, however, assumes that MH370 would henceforth fly in a straight line, which it obviously had not been doing. So in practice, the entire orange ping arc inside the white range circle is a valid search location. 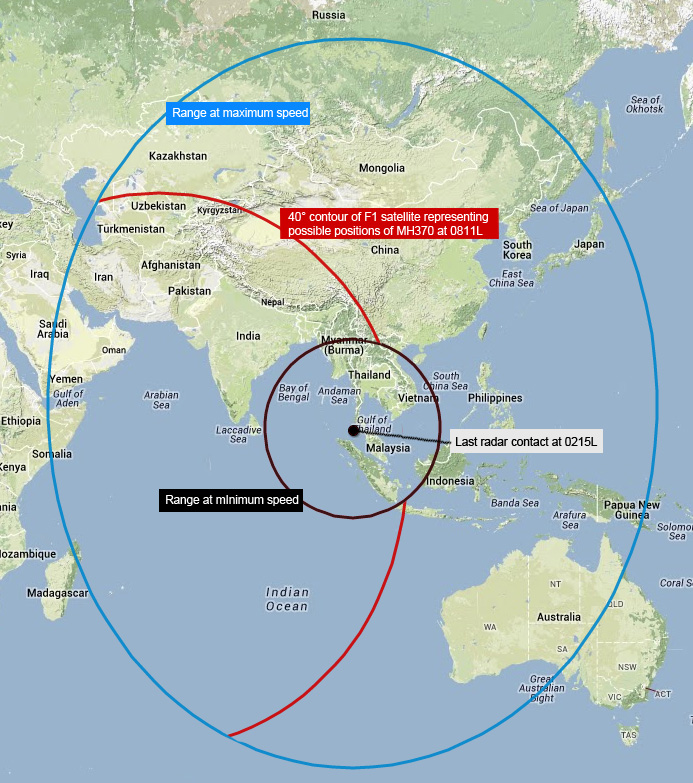 (It had previously been mooted that the interruption in the arcs was because another Inmarsat satellite would have picked up MH370’s ping had the plane been that far east. But in fact the interruption is not centered on the equator, as it would have had to be had it been due to a bisection from another geostationary satellite).