Ogle Earth looks at the political, social and scientific impact of networked digital maps and geospatial imagery, with a special focus on Google Earth.

In mid-2005, Google launched two products that would forever change how we think of maps, or for that matter, our planet: The Google Maps API let web developers build and deploy their own web-based maps; and Google Earth brought a free, high-resolution virtual globe to every web-connected household. Previously expensive satellite imagery was suddenly freely accessible to all. The possibilities were enormous.

This blog was started as a personal project to keep track of the many innovative ways in which people were using Google Earth. It soon became clear there was a wider readership for this kind of information, and for the first few years, multiple posts a day documented development tips and interesting use cases in science, society and politics.

Meanwhile, the differences between Google Maps and Google Earth were blurring: Their datasets were unified, and Google Earth also became available as a browser plugin. New mapping platforms by Microsoft and others stepped up to compete feature by feature. Location-aware mobile devices opened up a whole new way to consume (and produce) maps.

One major trend has been the rise of user-generated content: Any and all information with a geographic component now comes with a coordinate, from geotagged photos and videos to Wikipedia entries and news. Online communities share and curate discoveries gleaned from satellite imagery. Crowd-sourced mapmaking projects like Google MapMaker and the open-source OpenStreetMap compete to create up-to-date reference maps, especially where disasters strike in the developing world.

Although Google’s map dataset carries no legal authority, the ubiquitous use of Google Earth as a universal digital atlas over the past half decade has bequeathed it a popular authority, and a sense that Google’s choice regarding a border (or place name) constitutes a weighty endorsement in the court of global opinion. This has led to remarkable situations where states themselves have petitioned Google about perceived bias or inaccuracies. In other cases, states have balked at too much accuracy, with the enforced transparency of satellite imagery piercing the machinations of otherwise opaque regimes not used to public accountability.

Over the past few years, the pace of this blog has slowed, while its focus has shifted to the geopolitical impact of Google Earth, and to attempts by states to push back against Google’s mission to democratize access to geospatial data. Both India and China have succeeded in forcing Google to serve politically acceptable map datasets within their respective jurisdictions, through up until now Google has by-and-large resisted attempts to censor content globally. The next battleground is gearing up to be space law, with some states lobbying UN agencies to bring control over satellite imagery within their jurisdiction. 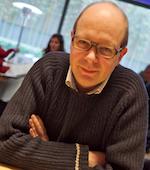 Ogle Earth is written by Stefan Geens — you can reach me at stefan.geens@gmail.com. I am Belgian but currently live in Stockholm after stints in Cairo, Shanghai and Beijing. I studied at the Johns Hopkins University School of Advanced International Studies (SAIS) in Bologna and Washington, DC, and have spent the plurality of my life in New York City. I work as a technologist; my clients include the Swedish state, for whom I’ve managed digital public diplomacy projects. I run Dliberation.org, which looks at the global politics of digital networks — how the rise of the Internet affects the distribution of power among citizens, states and corporations.

I also have an infrequently updated personal blog and am an unrepentant panographer.