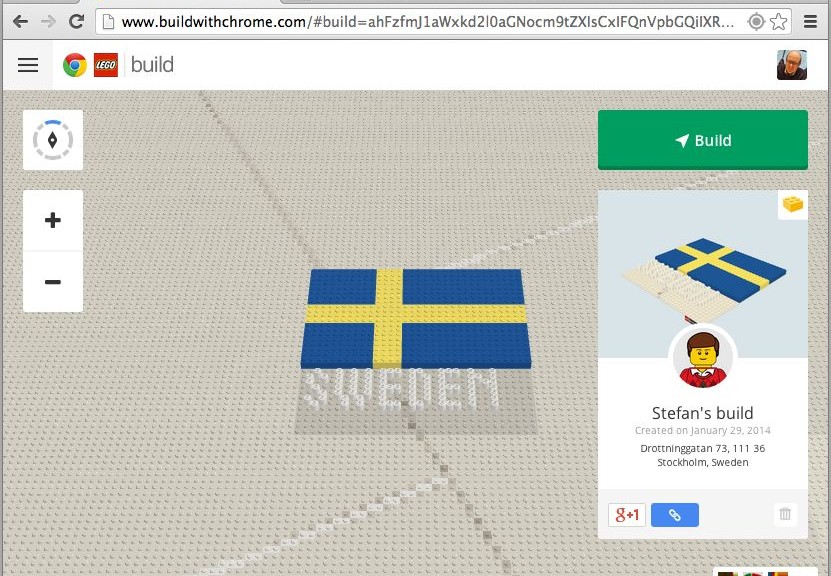 (This is a cross-post from an article I wrote earlier today for work, on Söderhavet’s blog, tough it is equally at home on this blog.)

Today’s extraordinary new time-sink is Build With Chrome, a collaboration between Google and Lego that lets you claim a spot in Google Maps and then build on it with virtual Lego blocks. I spent some time this morning playing with this impressive new tool, and have some first impressions to share about what happens when you marry Lego with Google Maps in the browser:

1. Welcome to the WebGL wars: Google is using this project to promote Chrome’s superior support of WebGL, a web standard for 3D visualizations in the browser. But whereas all the main desktop browsers today support WebGL to some extent, the real differentiation occurs on mobile devices: Android’s Chrome browser supports WebGL whereas iOS browsers do not. Although iPhones are technically capable of running WebGL, Apple has chosen not to deploy the technology.

I’ve long wondered why: Perhaps Apple is afraid that if robust 3D tools for the mobile browser become a standard, developers will have less of a motivation to build iPhone apps, which bolster the App store’s competitive advantage. A more generous explanation would be that Apple has simply been waiting for enough newish WebGL-capable iPhones to be in use before switching on the technology for everyone.

In any case, we at Söderhavet would love to have WebGL become a ubiquitous standard on mobile devices; we have pitches waiting for clients as soon as the technology works on both major smartphone platforms.

2. Déjà vu: Google has been here before. Back in 2006, it acquired SketchUp, a 3D modeling application, made it free, and added tools to build and deploy buildings in Google Earth. This was part of Google’s strategy to populate its maps with realistic models of the built environment — by having an army of volunteers make them. The result was a enthusiastic community of builders, though it never achieved a critical mass of users. Soon, a far more scalable way of digitizing the built environment emerged, with low-flying airplanes simply making 3D scans of cities. In 2012 Google sold Sketchup and the Google 3D Warehouse to Trimble.

3. Vectors vs blocks: One reason SketchUp didn’t achieve a critical mass of adoption is that while it was far easier to use than other modeling tools, it still had a relatively steep learning curve. In this way it resembles Second Life, which also provides vector-based tools for building in 3D. Minecraft first cracked the code for mass adoption: Abandon vector-based building in favor of discrete block-based construction — it doesn’t provide the same level of realism, but it is much easier to use, and that turns out to be a far more important prerequisite for widespread adoption.

The analogy is obvious: What Second Life is to Minecraft, Sketchup + Google Earth is to Lego + Google Maps. The result won’t be nearly as realistic, but it could become wildly popular. 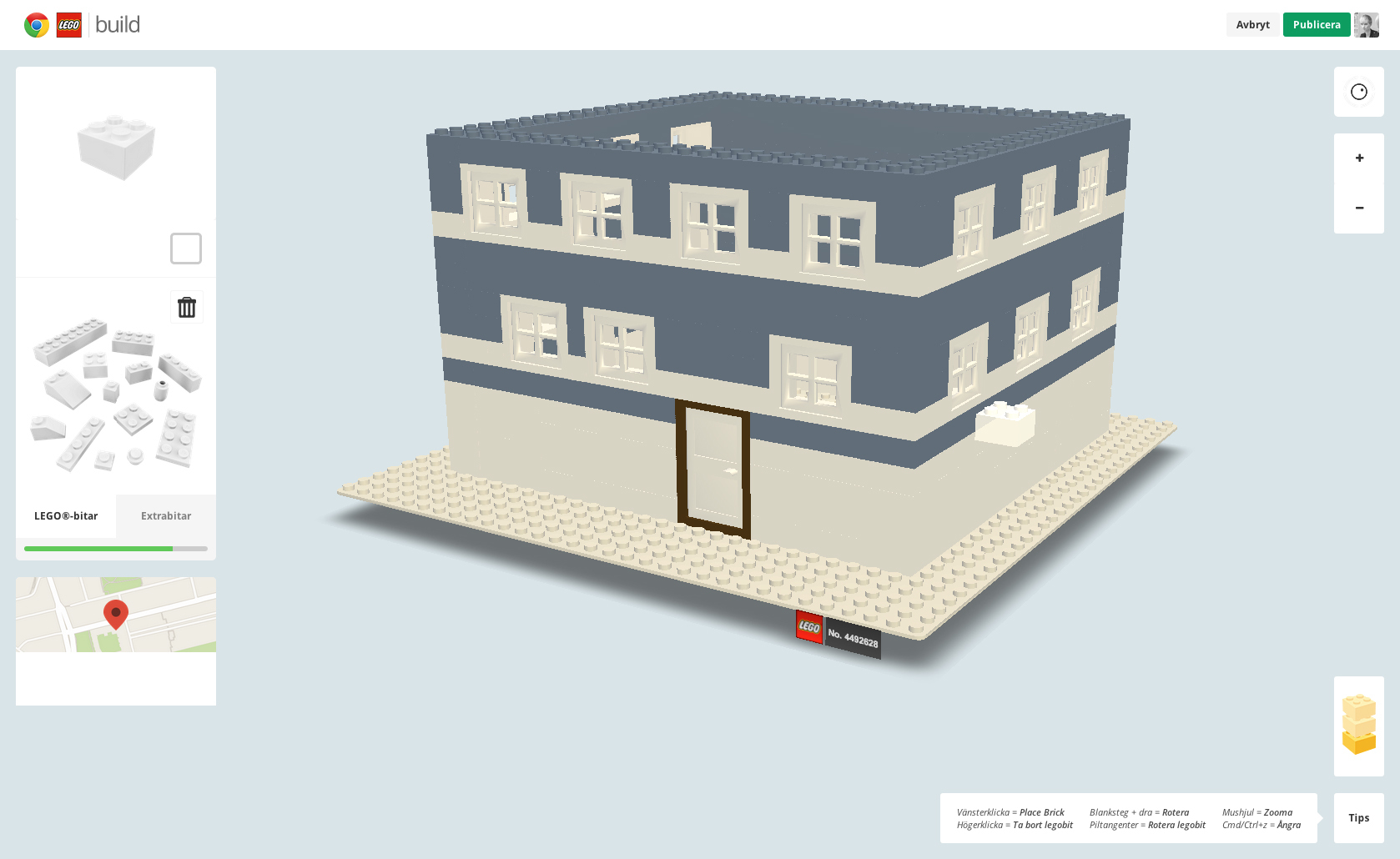 4. User-generated content on a map spells trouble: There are plenty of examples of how user-generated content on Google Maps and Google Earth has led to strife, because the implied authority of Google’s maps attracts scrutiny. In a fundamental sense, space on a map is scarce, even on a digital map, and especially if users get to build on a first-come-first-served basis, as is the case with the Google-Lego collaboration.

Some cautionary tales from the past few years: In Israel, activists mapped old Palestinian villages onto Google Earth, leading to a lawsuit. In Tunisia, activists georeferenced anti-regime videos onto the presidential palace. In Syria, activists used the Google’s Mapmaker tool to denounce the Assad regime by changing street names. Territorial disputes can lead to an arms race of squabbling place names in the Google Earth Community, which stores user-generated content — this was case for the Falklands/Malvinas.

Google’s House Rules for its Lego-Maps try to steer users away from “Lego hacking”, prohibiting the expression of advertising, sexual content, religious and political ideologies or harassment. But humans are political animals, and while a rainbow flag is innocuous to some, it is offensive to others — especially if it were placed in Sochi during the Olympics.

In fact, I just checked the Kremlin, and my hypothetical example has already been superseded by something much worse: 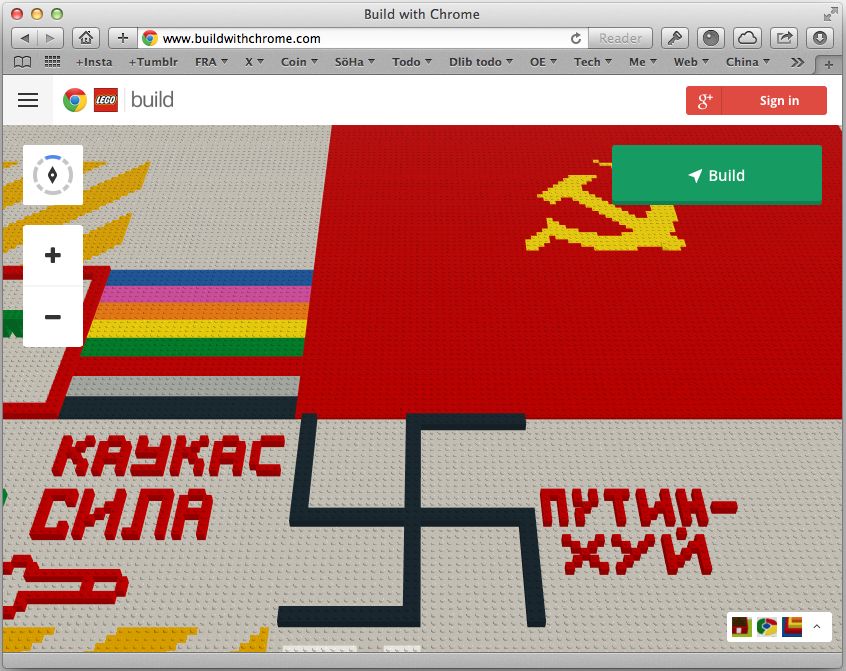 In all these cases, not taking a stance is also a stance. Activists know this, and will decide to test these limits to the max. Google will have its work cut out for it, especially if Lego-Maps proves to be an enduring success.