I now have three trajectory models of the Chelyabinsk meteoroid to share in Google Earth, from the three teams I am aware of who have published detailed results. The resulting KMZ file comes with a useful new feature: I’ve added geopositioned screenshots of the most useful videos, so you can now “fly” into each vantage point to check how the computed trajectories compare to the view in each video from the location it was taken. Here’s a quick tour on YouTube of the KMZ file:

Briefly, here’s what I’ve done: Initially, Google Earth allowed us to locate and measure YouTube videos to determine the angles of shadows, which enabled trajectory calculations, which have now been visualized in Google Earth. These trajectories can in turn be inspected visually from the vantage point of any number of geopositioned videos, resulting in an interesting additional method for verifying the accuracy of diverging trajectory calculations, short of going to these locations and making measurements in situ.

Before I do a walk-through of the trajectories and the videos, an exciting piece of news: A week or two ago, Jorge Zuluaga and Ignacio Ferrín — the duo calculating the trajectory of the meteoroid at the Physics Institute at the Univeristy of Antioquia in Medellín, Colombia — got in touch to discuss my original blog post on the use of Google Earth and YouTube as an ad-hoc sensor network for raw data on the meteoroid. They had taken my method and given it a rigorous mathematical make-over, aggregating information from four especially useful videos, including those contributed by commenters on Ogle Earth in the days after the event. From this trajectory, they calculated an orbit, concluding that the Chelyabinsk meteoroid was an Apollo-class Near Earth Asteroid.

In a classy move, Jorge and Ignacio asked me to co-author the paper they were writing, for having originally come up with the method which they then greatly improved upon. In the ensuing collaboration we identified additional useful videos, worked on the included Google Earth visualizations, and honed the prose. The paper, The orbit of the Chelyabinsk event impactor as reconstructed from amateur and public footage, has just been published to arxiv.org (here’s the PDF). The KMZ file discussed in this post (download and open in Google Earth) is the one attached to the paper. Note that the paper makes a point of thanking several commenters by name for their contributions to the original blog post. Citizen science FTW!

Now for some notes on the different trajectories: 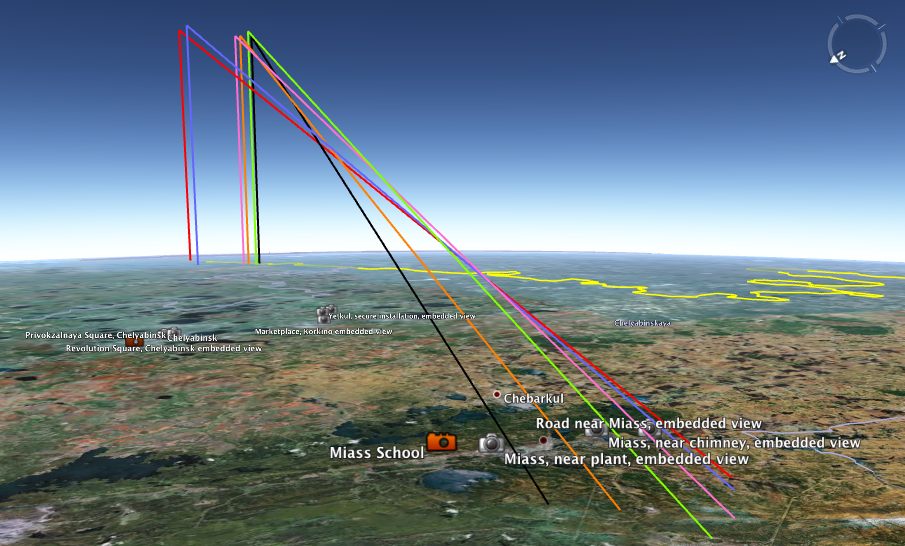 Accuracy I: The NASA trajectory (in red) is derived from coordinates courtesy of Sebastien Pauleau, who calculated them from a close study of the trajectory map NASA released here, modeling the result on a WGS84 datum globe. He reports that while the accuracy of his model is calculated to 4 decimal points (an error of within 10m around Chelyabinsk, the limit of Google Earth’s accuracy with respect to the positioning of its imagery), it’s not possible right now to know how accurately NASA plotted its map. The Colombian trajectories (pink, green, black, orange), are also plotted to 4 decimal points, while the Czech results (blue) are plotted to 3 decimal points (within 100m), though of course the real error bars are a lot larger in at least all-but-one case (or else all the calculated trajectories would all have to lie within 100m of each other). The Colombian coordinates were shared directly; the Czech coordinates were published here.

Landing sites: We know that a good-sized chunk landed in Lake Chebarkul, and in the original coarse calculation I used that information as an input, fixing the lake as an endpoint for the trajectory. None of these more accurate “pro” trajectories make this assumption, and it is clear from subsequent news articles that the landing area extends beyond and around the lake. As a result, all calculated trajectories overshoot Lake Chebarkul, intersecting Earth just past the town of Miass.

Accuracy II: Because all these calculated trajectories are straight lines, there is an important caveat: From having looked closely at many geopositioned photos and videos, it seems clear that the real trajectory of the meteoroid changes as a result of the main explosion just south of Chelyabinsk. The post-explosion path seems to aim at bit more steeply at Earth, and may even have changed its azimuth (direction). Also, as the meteoroid slows down through atmospheric friction, it will begin to “fall” in a more classic arc. No one straight line can model such a more complex path with complete accuracy.

As a result, I think all current calculated trajectories overshoot the real landing site. I suspect most of the meteor mass landed between Lake Chebarkul and Miass, not beyond Miass. There are no videos from Miass showing a path flying overhead, though the calculated trajectories do assume such a path. One Miass video in particular (“Miass, near chimney” shows the contrail almost perfectly head-on, suggesting the the main part of the meteoroid landed in front of the viewpoint (towards Chebarkul).

Other viewpoints in Miass (“Miass, near plant” especially) suggest that some of the calculated trajectories do a better job of modeling the pre-explosion path, while others are more accurate for the latter part of the path. It’s important to note that around Miass, because the meteoroid was so close to Earth, very small differences in the calculated path can have a very large perceived effect, with changes of just a few hundred meters radically altering the perceived view.

From what I understand, it’s possible to construct even more accurate trajectory models that do not assume a single straight line, and I think this is where astronomers’ efforts will lie in the future.

Accuracy III: One word of caution about the geopositioned screenshots in the KMZ file: It’s not possible to accurately compensate for fish-eye effects and other distortions in Google Earth beyond basic field-of-view adjustments, and the videos do not always contain sufficient environmental references to precisely measure the heading, tilt and roll of the camera viewpoint. So these videos cannot be used for detail work, though they do work well when trajectories diverge greatly, as is the case near Miass.

Interact: The KMZ file is fully editable, so feel free to edit the embedded screenshots (Right-click an item in the Places sidebar, select Get Info) to see if you can get a better fit against the calculated trajectories. Although it is tempting, I tried not to align the meteoroid path in the video capture with the calculated trajectories in Google Earth, relying instead on clues from the surrounding environment. It’s possible to infer quite a lot from aligning the placement and angles of objects in the geopositioned video capture with imagery on the ground.

Interact II: Do play with the opacity slider at the bottom of the Places sidebar (click the gradient button, if you need to); this makes it much easier to make comparisons (watch the video above to see how). Finally, if you’re wondering how I managed to fly around so smoothly in Google Earth — I use this to navigate 3D space.

40 thoughts on “Three trajectory models of the Chelyabinsk meteoroid compared”