For autocratic regimes, naming landmarks is both a perk and a tool — a cheap stab at immortality and a means to cement authority: In Syria, examples abound: The main highway through Damascus is named after the late despot Hafez al-Assad, father to the current one. In the coastal town of Latakia, a main street is called 8 Azar Avenue, named after the March 8, 1963 coup d’état that brought the Ba’ath Party to power, soon headed by the al-Assad clan. (March = Azar = آذار)

Should the al-Assad dynasty fall in Syria, these names will certainly change. In the meantime, how do reference maps depict such landmarks? Taking Latakia as an example, here’s a conventional, static tourist map found online:

How about Google Maps and Earth?

What’s going on here? Israeli news site Arutz Sheva flags an article in Syria’s Damas Post (translation), dated Friday, January 6, 2012, which first noticed that a new name “15 Azar” had been added to Google’s maps. The reference is to March 15, 2011, when mass protests erupted in Daraa, launching the present uprising in Syria.

In Damascus, the Hafez al-Assad highway shows up in Google Earth with two names:

Who is Ibrahim al-Kashosh? At the start of the uprising, he penned popular songs mocking Bashar al-Assad, admonishing him to leave power. He was later found dead in a river with his vocal cords ripped out.

What’s unusual in these two examples is that the names exist as part of Google’s official place name dataset — in previous cases, such apparently rogue names had been attributed to contributions in third-party content layers. The Damas Post uses this observation to construct an elaborate conspiracy theory involving the Egyptian Google employee and activist Wael Ghonim, whom it accuses of promoting a pro-western agenda in collusion with the US through “the implementation of the theory of creative chaos”. The surreptitious renaming of streets is meant to be an example of such “creative chaos”.

That is of course not what happened, through the truth also carries interesting implications. For a few years now, Google’s been crowd-sourcing map making in those regions for which no good online reference datasets exist, in competition with OpenStreetMap. Google’s tool, Map maker, lets any user add or edit streets, placemarks, and names, with a review system in place to catch errors:

The first time a Map Maker user makes edits to a map, the edits may require review and approval before the edits will be published. Once a Map Maker user has made a few approved edits, most of the subsequent edits will go live automatically. However, some types of edits or edits in specific regions will always require review, regardless of how experienced the mapper is. In addition, some edits may require multiple reviews before the edits appear on Google Maps.

There is no need for Google or the US to engage in creative chaos: It would be enough for some enterprising opponents of the al-Assad regime to get some of their edits past unwitting reviewers for these name changes to make it onto Google Maps and Earth. 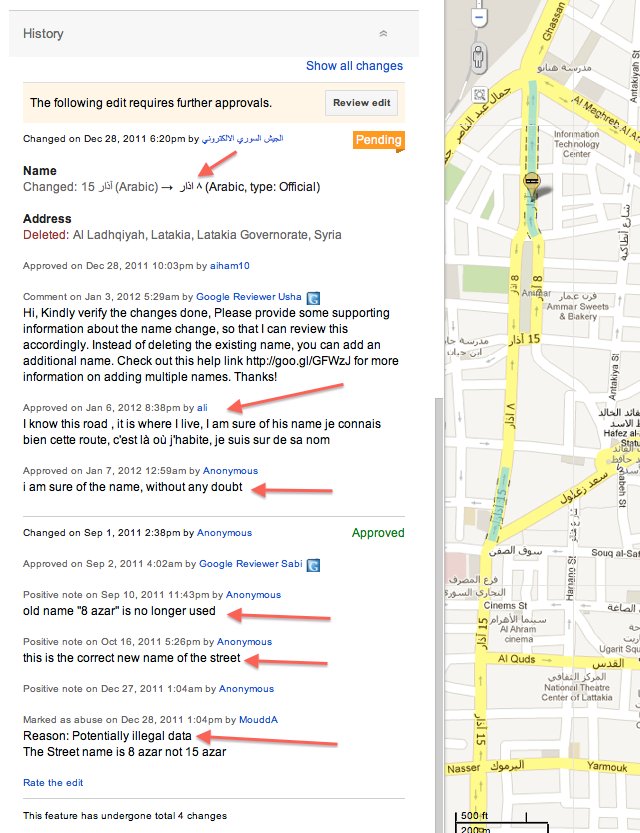 What we’re seeing is a request to have the street name changed back to March 8. Below it is the edit history, which shows that the name change to March 15 was promoted by several anonymous users in the past few months.

In Damascus, the current name for the disputed highway on Map Maker and on Google Maps is not the same as what you see on Google Earth. Both “Hafez Al Asad” and “Ibraheem Al Kashosh” have been replaced by the more neutral-sounding “Southern Bypass” / “Mothalik Aljanobi” / “المتحلق الجنوبي”:

But if you begin searching for Ibrahim’s name in Map Maker, his name is autosuggested, though without returning a result — indicating that the name did exist on the map, but not any longer:

The edit history also shows that Hafez al Assad’s name on the highway was replaced by the existing “Southern bypass” by a moderator on December 14, 2011. (Click on the history tab on the bottom of the linked page above to see for yourself.)

Since Google Earth’s dataset of place names is updated less frequently that Google Maps, what we’re likely seeing in Google Earth is an earlier snapshot of an edit war that was eventually resolved in a truce: Neither the name preferred by the regime nor the one by its opponents stayed; instead a neutral descriptive name was chosen. Unless Google intervenes in this case, expect Google Earth to have the highway labelled as “Southern Bypass” / “Mothalik al-Janobi” / “المتحلق الجنوبي” soon enough.

So is Google the only mapping provider susceptible to this latest innovation in guerrilla mapmaking? No. In fact, OpenStreetMap has been hacked in exactly the same way, and on the very same highway: 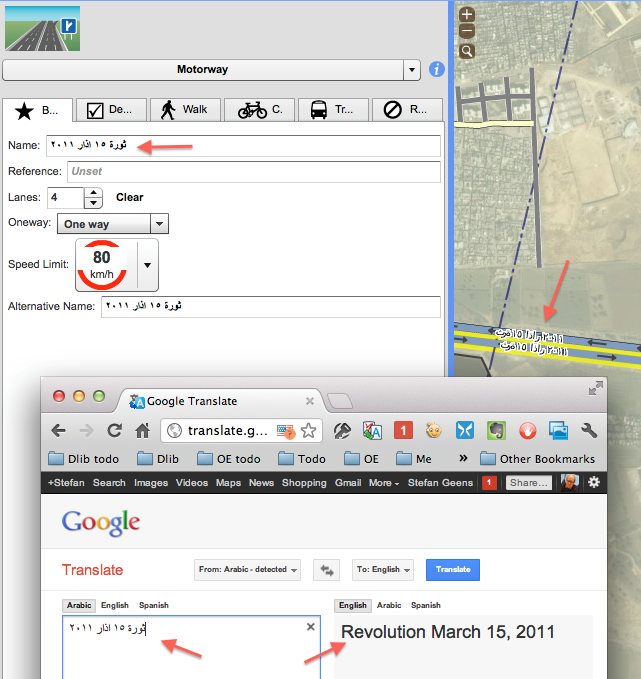 In OpenStreetMap, the highway is currently named after March 15, 2011, the same revolutionary date we saw in Latakia. MapQuest, which periodically imports OpenStreetMap data for its map of Syria, still names the highway after Hafez al-Assad (on a barely legible map):

Unless OpenStreetMap does any further edits to this item in its dataset, MapQuest too will soon have a renamed highway on its map.

Are there any far-reaching implications to the fact that OpenStreetMap and Google Map Maker are susceptible to political hacks? I don’t thinks so; it’s a challenge that Wikipedia has long dealt with, and the problem can be minimized, if not completely eradicated, by alert moderation. And if the alternative to crowd-sourced maps of places like Syria is no online maps at all, then the overall advantages far outweigh the occasional blip. This is the Yahoo Map for Damascus today:

Which, when you compare it to a crowd-sourced map at the same scale, manages to be both devoid of information and fictitious:

8 thoughts on “Google conspiring for regime change in Syria through maps? Hardly.”