In Sweden late last week, the story “broke” [translation], as it tends to do every few years, about how Sweden’s military secrets are visible in imagery on Google Earth and Maps, but not on its local competitors, Hitta.se and Eniro.se, amid general consternation from random interviewees.

The one big difference this time round is that Google Sweden’s own spokesman, Andreas Svenungsson, appears to join in, expressing what Swedish Radio describes as “self-criticism” when he says that “clearly, if it’s not supposed to be there [on the map] then we will take it away.”

It is possible that he was being diplomatic, knowing full well that Google is not required to censor imagery taken from space or which is already in the public domain. Much better, however, would have been to use the interview as a teachable moment, pointing out that just like any other country, Sweden has no sovereignty over space, but that it is welcome to censor its own aerial imagery before it is published by Sweden’s national GIS agency, Lantmäteriet. And that Google has no obligation to use Lantmäteriet’s imagery, though it currently does for large parts of the country.

This blog has long lambasted Lantmäteriet’s policy not just of censoring its maps, but of obfuscating the censorship, making it look as if “sensitive” locations are forests or fields instead of just pixellating them. Lantmäteriet was caught doing this with the National Defence Radio Establishment (FRA) HQ back in 2006 and more subtly in 2009. This kind of behavior undermines trust in all their maps and data, and is unbecoming an open society, especially when the information is easily available via other channels. (The Dutch, for example, openly pixellate.) There was a moment of hope earlier this year, when it looked like Lantmäteriet had moved on from these cold-war methods: It released what appears to be uncensored imagery of the FRA HQ, visible in Google Earth. It now looks like this was just sloppiness on their part.

Because Google’s spokesman doesn’t educate the reporter, Peter Andersson, much of his article is mired in confusion. The current panic is about the locations of the two main underground control centers for Sweden’s air force — one near Stockholm, and the other in the South of Sweden; both are well-known nationally. In Google Earth, the one outside Stockholm is visible, but not the one in the South. This happens to be because near Stockholm, Google’s current imagery consists of uncensored satellite imagery from DigitalGlobe; in the South, it uses censored imagery from Lantmäteriet. Andersson and his interviewees assume that because one of the locations is censored, both should be.

In fact, neither is: Even in the South, if you use Google Earth’s historical imagery tab, you can see two uncensored views of the control bunker area. It’s imagery dated from 2006 and 2009, and curiously also credited to Lantmäteriet, which obviously previously released it into the public domain without censorship. The location is very easy to find for anyone with basic Googling skills: Searching for the generic name for these underground centers, “stridsledningscentral”, leads to an article discussing how the nearby village of Hästveda depends on jobs at the control center in question. In Google Earth, the village is easily found. Then, by toggling between the current imagery and that from 2009 using Google Earth’s historical imagery panel, the Photoshopping by Lantmäteriet of the current imagery pops out immediately from the surrounding countryside, because it looks like buildings in 2009 have been replaced by virgin forest in 2010: 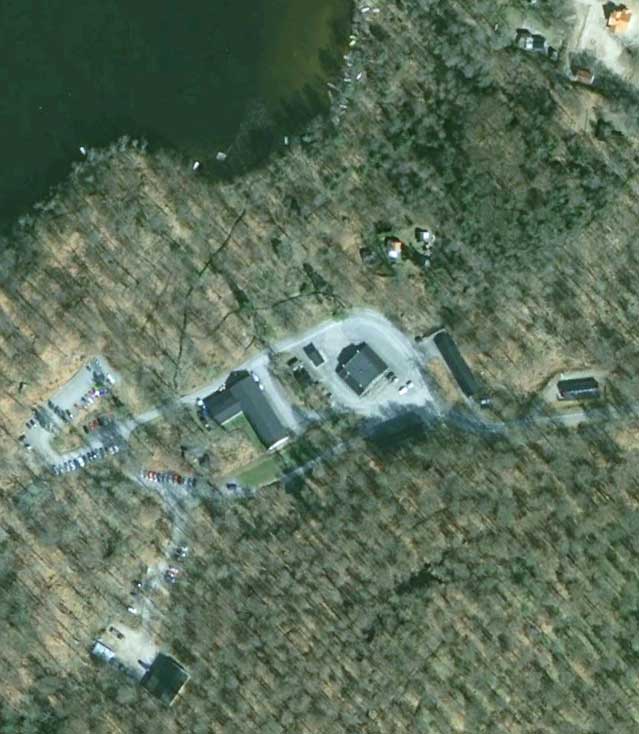 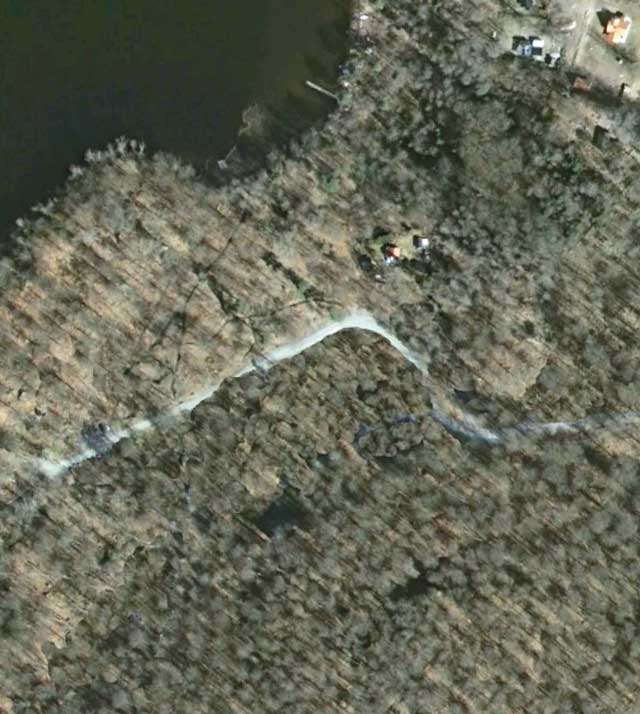 Try it yourself at this location in Google Earth (open downloaded KMZ file in Google Earth). Nobody should be in any doubt that keeping this kind of “secret” is pointless; the effort and intelligence required to discover it is so minimal as to render the term meaningless. The only people not in the know are those who don’t care.

(If you read Swedish, this post on Cornucopia? runs through how the various mapping services portray Sweden’s various “secret” locations.)