Via a comment left under the previous post here on Ogle Earth, a pointer to just-released high-resolution satellite imagery of Osama Bin Laden’s compound, published by DigitalGlobe to their Flickr account. Dated January 15, 2011, and showing a scene with denuded trees, the black-and-white image clocks in at 5368 × 5719 pixels, making it an ideal image to place as an image overlay into Google Earth.

So without further ado, here it is as a KMZ file to be opened in Google Earth. It’s 6MB, so give it some time to open. As usual, play with the opacity slider on the left-hand side to compare the base imagery (from June 15, 2005) with the updated B&W imagery from 2011. I’ve also added an outline of the compound; feel free to turn that off to get a better look. 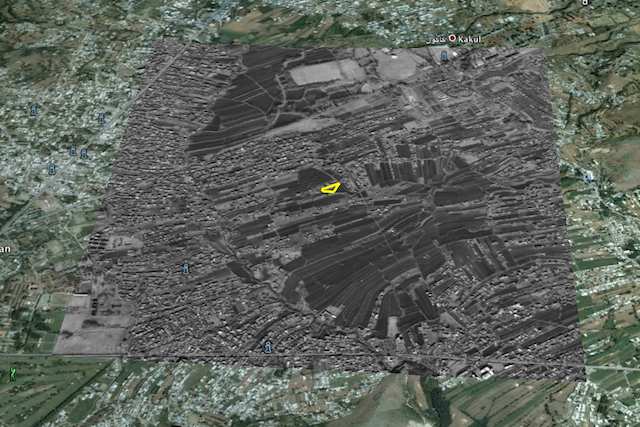 As you may know, there is also a layer in Google Earth that outlines the locations of DigitalGlobe satellite images taken over the years (under “More”). I actually went looking there today to see if there had been any recent activity over Abbottabad, because in past cases (such as when Israel destroyed a nuclear reactor in Syria in 2007), an area of close interest to a DigitalGlobe customer would later show itself to be the location of a military strike. The most recent date shown for a DigitalGlobe image of Abbottabad is 2006… followed of course by the current image from January 2011. So could we have known (with hindsight) that something was up in Abbottabad? No, because Google Earth does not yet show where DigitalGlobe imagery for 2011 has been taken. The above image is too recent!

(For older coverage of the Osama Bin Laden compound’s location, check out my previous post.)

[Update May 3: Google today updated its base image layer to include imagery from Abbottabad taken on May 9, 2010 — just under a year ago.]