Much fun has been had at Apple’s expense this past week over the half-baked mapping product it released with iOS 6. The main benefactor has been the Google Maps team, whose painstaking work and years of experience are no longer in danger of being taken for granted. Publishing digital maps that “just work” is proving to be a lot more difficult than most realized, with The Atlantic and TechCrunch pitching in to tell that story.

As Internet serendipity dictates, the Apple Maps blowback meme soon crossed another meme — the flare-up in the ongoing territorial dispute over the Senkaku/Diaoyu islands, with China, Taiwan and Japan all claiming sovereignty. First, there was the (incorrect) rumor doing the rounds in Beijing that Apple Maps had taken sides: 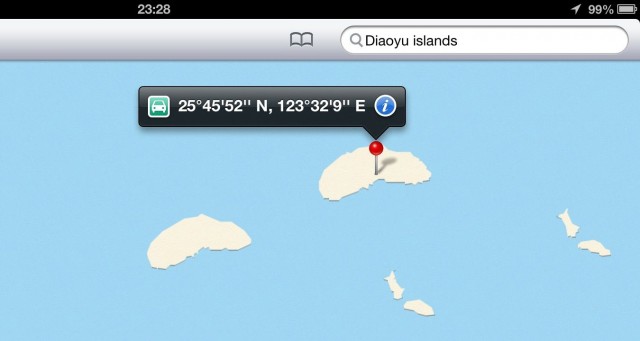 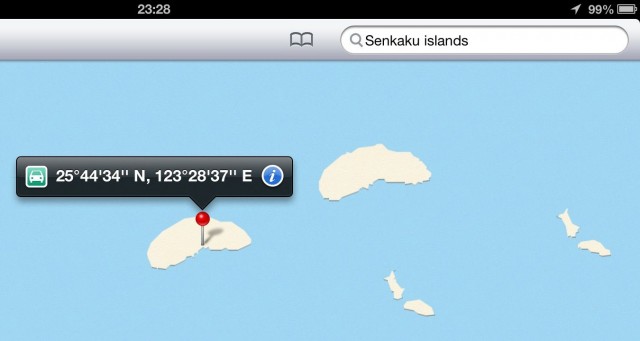 When viewed in satellite view, the island labeled by the Diaoyu search disappears: 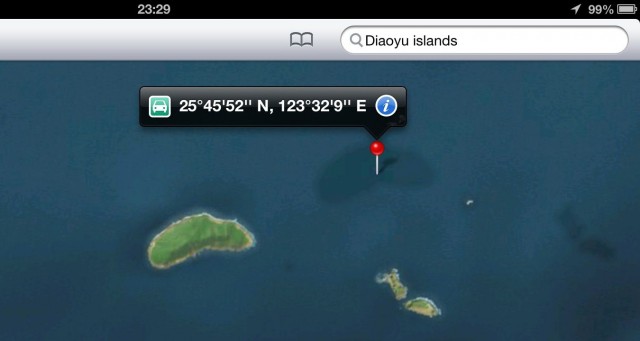 How does Google Earth/Maps stack up against Apple’s efforts?

First, there is clear evidence that Google also grappled with raw data containing a duplicate set of islands. Zoom in close enough in the satellite view and you see that the non-satellite seafloor dataset makes room for satellite imagery in a repeated, transposed pattern along a NE/SW axis, separated by the same margin of error that separates Apple Maps’ islands: 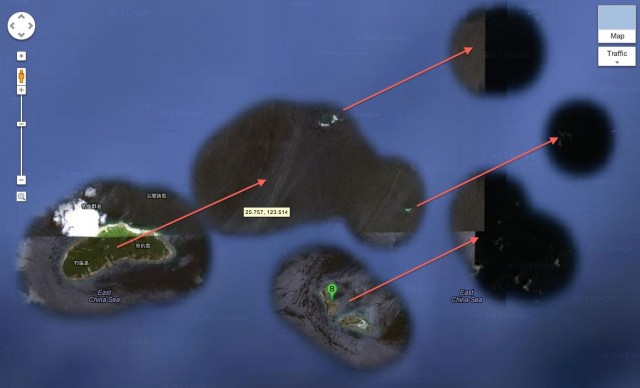 It’s fair to conclude that Google ran the seafloor masking algorithm before any human map error correction. In this case, the result is just some extra satellite imagery of island-less — but not completely empty — ocean: Just at the edge of the mask we see what I assume is a Japanese patrol vessel plowing full-steam ahead towards the islands, in an image captured on July 30, 2009. 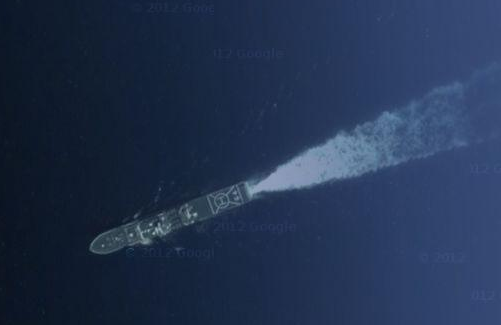 In Google Maps’ map view, meanwhile, there is just one set of islands represented — the southwesterly one, as this is where georeferenced satellite imagery actually places the islands. This implies that at some point, a human was involved in noticing and correcting the duplication.

In Google Earth, turning on historical imagery removes the seafloor mask, so you can see the satellite image tiles in their entirety. One nearby tile alerts us to the presence of an outlying islet some 100km east of the main group; Google’s masking algorithm doesn’t quite pick it up. It is therefore invisible in the satellite view of Google Maps, and in Apple Maps too.

How might the duplicated islands have come about? Close inspection in Apple Maps (on an iPad — Apple’s maps are mobile only) reveals that the datasets are not identical; the contours of the islands are drawn differently. They thus come from different sources. And while all mapping data sources can contain one-off errors, officially sanctioned maps of China are all offset spatially by a variable amount in a ham-fisted attempt at thwarting GPS-based georeferencing by mere civilians.

My strong suspicion, then, is that the duplicate island belongs to an intentionally inaccurate Chinese dataset. There is some irony in that.

When it comes to labels, Google approaches the dispute in a typically Googley way: In Google Maps (though not in Google Earth, curiously), we get more information, not less: 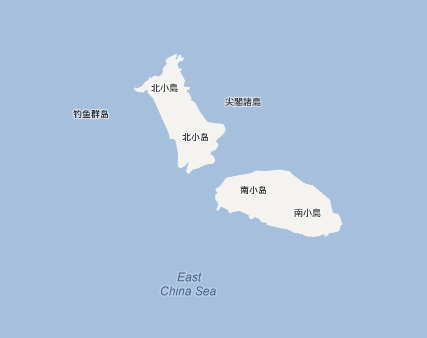 This approach to disputes is similar to Google’s dual labeling of the Persian/Arabian Gulf and the East Sea/Sea of Japan, though it is a policy that is at times applied haphazardly: For a similar dispute between Korea and Japan over the Liancourt rocks, Google Maps stays mute while Google Earth gets an expository popup label. And Google doesn’t currently label the Senkaku/Diaoyu islands with a Roman alphabet, which makes it difficult for most Google Maps users to comprehend, unless they have the third-party Panoramio photo layer turned on.)

Finally, a few more observations re Apple Maps that don’t quite fit anywhere else: 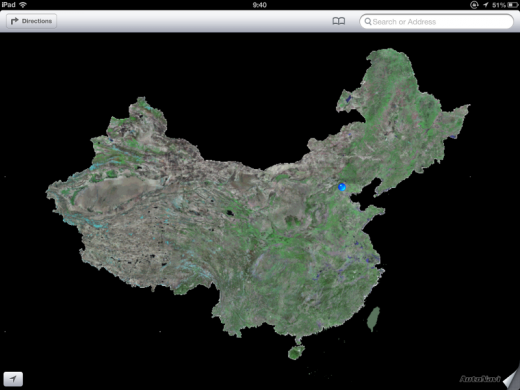 Image courtesy of The Next Web

I’m intrigued by the technical “solution” behind this behavior: One likelihood is that Apple’s servers check the iOS device’s geolocated IP address before deciding which imagery dataset to send it. Google, in contrast, quarantines its country-specific datasets behind separate URLs (maps.google.co.in, maps.google.kr…), leaving the choice of dataset up to consumers, with governments free to block URLs from their citizens if they dare.

As a corollary, the Chinese Maps dataset provided to Apple by its Chinese provider is not available globally, but only to users inside China. If you repeat China resident Anthony Drendel’s search in Apple Maps for “Lijiang Teachers College” outside China, you get a different view:

It is possible that Apple’s solution does not require a conspiratorial collaboration with the Chinese authorities. As the logo in the bottom right of Drendel’s screenshot shows, his dataset is provided by Autonavi, a company specializing in Chinese mapping data only. Maybe Apple simply hasn’t had the time or the legal license to properly mash together Autonavi’s dataset with Apple’s global dataset, including Tomtom’s. A lack of time would also explain the duplication of the Diaoyu/Senkaku islands.

[Update 2012/09/26: A post on the Wall Street Journal Digits blog today appears to confirm that a lack of time prevented the integration of the Chinese and global datasets, quoting a source:

Integrating the two would take time due to a number of complexities, which include integrating map search databases and coding, a person familiar with the matter said.]

2 thoughts on “Apple Maps and the Diaoyu/Senkaku islands”