If you are a web-based service provider and don’t have operations in a specific country, then that country’s laws cannot constrain the services you provide to users there. If Bahrain were to decide it doesn’t like Google’s maps, it could try to block the relevant URLs wholesale, but it has no legal recourse to compel Google to censor its maps. That’s because there are no Googlers, Google servers, or Google Street View cars in Bahrain.

But with Google’s global operations now having expanded to over 40 countries, far more countries are able to regulate the services Google provides locally. And when it comes to mapping and location-based services, some of them most definitely do.

Over the years, China and India have been the two main countries tracked on this blog for authoritarian tendencies when it comes to borders, names and third-party content. Because of the size of these two markets, Google has generally acquiesced to the legal restrictions governing locally published web maps, but has always made sure to contain the damage to the datasets aimed at these countries. Local users have always had recourse to the unmolested content served from outside the country — the reference content of maps.google.com and Google Earth.

Recently, it has become apparent that South Korea has also been placing constraints on what maps.google.co.kr is allowed to show. Because South Korea’s laws are easily accessible, this makes for an interesting case study in how Google tries to accommodate local laws in its local services without compromising the integrity of its global dataset.

The main way in which maps.google.co.kr differs from maps.google.com is the maximum zoom level available for the satellite view of Korea, which maxes out at a far lower resolution than for the global map. On maps.google.co.kr, the furthest you can zoom into Korea is this: (Click to go to these locations on the relevant maps)

On maps.google.com, you can zoom in a further three steps.

On Google Earth, of course, you can zoom in as far as the DigitalGlobe imagery will bear.

Why is Google’s Korean map behaving this way? In short, because of Korea’s Spatial Data Industry Promotion Act from 2009, specifically Article 7, which states that:

Article 2 of the Protection of Military Bases and Installations Act, in turn, explains that:

And considering the existence of the most heavily militarized border on the planet between North Korea and South Korea, this means a substantial part of South Korea is riddled with military installations.

By limiting the maximum resolution of its Korean imagery on maps.google.co.kr, Google appears to have satisfied Korean regulators that it is obeying the relevant Korean laws. Thus, Google avoids having to blur or otherwise censor the satellite imagery base layer for Korea — something which it has successfully managed to avoid in China, India and elsewhere.

When it comes to road and point-of-interest data, the datasets for maps.google.com and maps.google.co.kr appear to be identical translations, probably because the data is locally sourced. This would explain why large areas near the border remain unmapped, and military installations remain unlabeled. Many of these installations on both sides of the border are labeled in Google Earth by third-party contributors, however.

There is one final quirk to how Google delivers map information about Korea. When viewing satellite imagery in maps.google.com, you can zoom in on a highly accurate rendition of the Military Demarcation Line (MDL), which indicates exactly where the front was when the armistice agreement was signed in 1953.

A far more vague MDL is depicted on maps.google.co.kr and in the map view of maps.google.com, which is strange, considering that we can assume the North Koreans know exactly where the line is:

Google Earth also carries the vague version of the line, but additionally displaces it by around 500-1000 meters to the east.

I’m putting this down to a glitch, however. You can always load up on Korean War maps as a KMZ file for Google Earth.

How does Google’s Korean map compare to the local competitor, local.daum.net? When zooming in on satellite imagery with Daum, at a certain point the border region becomes completely blacked out, putting Google Maps at a relative advantage there.

For satellite imagery outside of the immediate border region, however, Daum lets you zoom in far closer than on Google’s Korean map, without any further apparent limitations, though the imagery is in all likelihood censored to obfuscate military installations, something which Google has always said it is unwilling to do. Its depiction of the DML is equally vague as on maps.google.co.kr.

Daum also offers historical satellite imagery of South Korea in its web-based map — something which Google only offers in Google Earth — and even historical Street View imagery of Korea, which is something Google doesn’t offer anywhere (yet?). 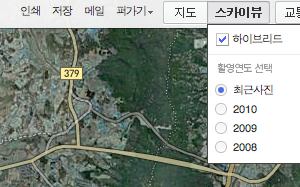 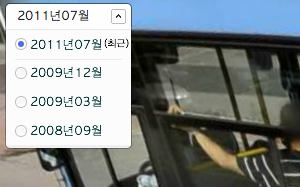 The big picture
It is apparent (to this non-lawyer) that in containing online censorship to within the legal jurisdiction of the country making the demand, Google (and Twitter and Tumblr) are hoping to build a legal norm. Their solution may well satisfy the letter of the law, but it does not really satisfy the intent, because in the networked age locally censored content is always available uncensored on another domain, in this case also controlled by Google. It would be ridiculous, for example, for sensitive sites in India to be redacted if they remain readily visible on Google Maps in Pakistan. In the same way, it is pointless for a British court to enforce a super-injunction by only demanding that Twitter remove an offending Tweet from the UK version of the Twitter stream, considering how easy Twitter makes it to circumvent the block. (I approve, of course.)

The risk is always there, though, that a country might decide to innovate its legal approach so as to punish Google or Twitter locally for a refusal by global HQ to resort to censorship globally. It’s not unthinkable, as this recent report on extraterritorial jurisdiction from Harvard’s Kennedy School of Government makes clear:

While states tend not to assert criminal jurisdiction over foreign companies directly, they do make use of a range of parent-based methods of regulation (i.e. domestic measures with extraterritorial implications) under which a parent company may be held criminally responsible for contributions to the crimes of others, including the foreign conduct of foreign actors, or failures to ensure compliance by those over which it is able to exercise control. [p.142]

There are many subtle ways a state can retaliate against local operations. Just ask Google’s Chinese operations. The one big deterrent would be the promise of a robust retaliation from the US government in terms of trade policy.

Update 20120702: Also see my follow-up post on how Apple censors satellite imagery of South Korea in its iPad Maps app.

5 thoughts on “Constraining online maps: The case of South Korea”