A few hours ago South Sudan went live as the Earth’s 193rd nation, amid scenes of jubilation in Juba and elsewhere.

Considering that the country is right this moment a cartographic focal point, and that Google Earth is the usual gold standard for this kind of reference, this constitutes something of a missed teachable moment — not just about South Sudan, but also about how online atlases are supposedly instantly updatable, in opposition to all paper atlases, which are now without exception irrevocably out of date.

In any case, considering that South Sudan is comprised of the bottom three regions of Sudan (comprising 10 of the old 25 federal states, which were Sudan’s first-level administrative borders) it’s quite easy to make your own South Sudan map, by removing the superfluous bits from this original Sudan map by maplibrary.org. The result: An outline map of South Sudan as a KMZ file, so that your edition of Google Earth can stay current until the long-anticipated yellow line gets added.

It will be interesting to see how Google decides to represent Abyei, a town straddling the border between Sudan and South Sudan. Pending a referendum which should decide which country it will ultimately join, Abyei officially belongs to both Sudan and South Sudan. On May 21 2011, Sudanese forces took control of the town, though these have now apparently withdrawn, to be replaced by UN troops from Ethiopia.

In other words, there should be a red line surrounding the disputed area of Abyei. The size of this area was previously also a matter of dispute, but as of 2009 both sides agree to the boundaries set at the Permanent Court of Arbitration in The Hague. They now look like this: 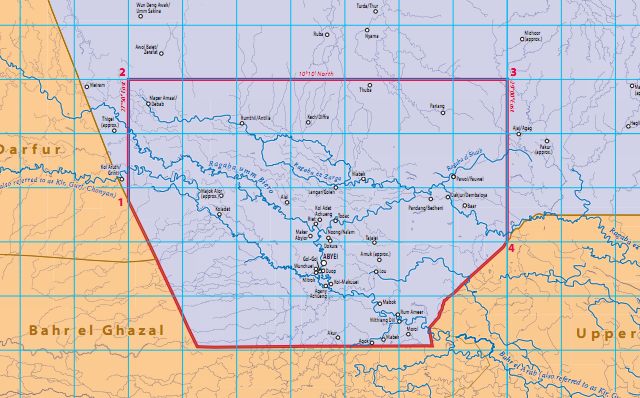 I’ve added it to the KMZ map downloadable above. That map looks something like this: 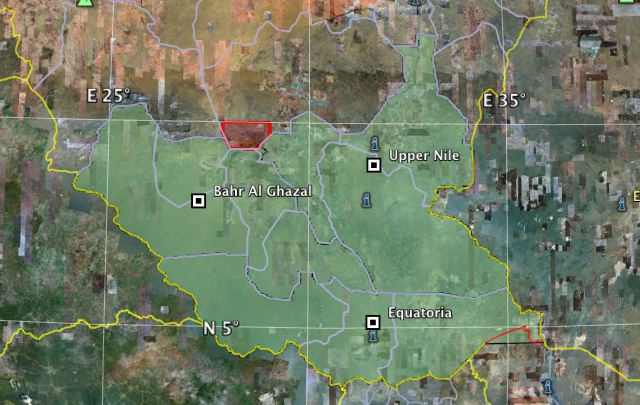 PS Don’t get me started on the Ilemi Triangle, bottom right on that map — a border dispute with Kenya now inherited by South Sudan.

UPDATE July 10: Over 24 hours have gone by and still none of the “big three” mapping services (Google, Yahoo, Microsoft) show South Sudan’s borders. In addition to Wikipedia, OpenStreetMap also had the new border in place soon after South Sudan’s independence. I’m really surprised the big players dropped the ball, considering how this event was not exactly unexpected, and an obvious opportunity to do some CSR PR. It turns out the scrappy not-for-profits got there first.