The Satellite Sentinel Project — which uses satellite imagery to monitor human rights and ceasefire violations in the border area between Sudan and South Sudan — today issued a report showing satellite images of what appear to be mass graves near the village of Kadugli in Sudan’s South Kordofan region. These images were taken to corroborate eyewitness observations. The high resolution images are made available on Flickr here, and are accompanied by a PDF that provides the narrative context. 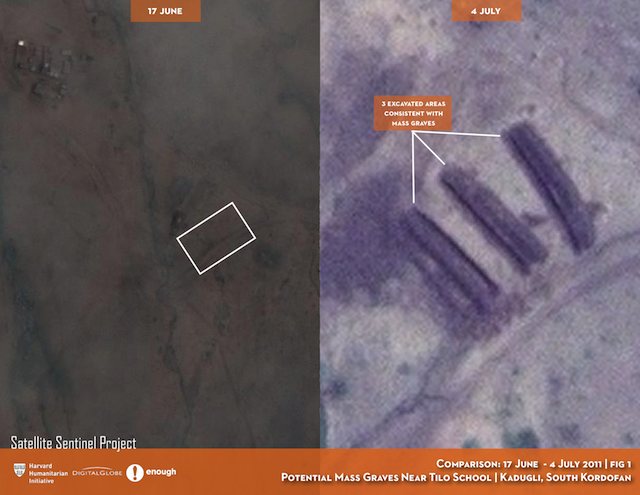 What these images attempt to show is that since early June, Sudanese-backed troops in Kadugli have been rounding up and executing suspected sympathizers of the Sudan People’s Liberation Movement (SPLM), an opposition militia. Eyewitness accounts talk of mass graves being dug to bury the dead beginning on June 8. The report provides imagery from June 17 and July 4, with the latter imagery showing clear signs of excavation. Satellite Sentinel Project concludes that the June 17 imagery shows “no discernable activity at the alleged mass grave site near Tilo School” that day but that the July 4 imagery does show excavations.

From looking at the imagery, I think that the June 17 imagery does in fact show evidence of recent activity, just no open pits on that day. You can see on the June 17 imagery what appears to be recently flattened earth, consistent with bulldozed-over pits, in a pattern that is especially visible on the July 4 imagery, right next to the the open pits visible on that day.

But the point of this post is mostly to add a further layer of context: These images need to be shown in Google Earth to give them an immersive quality and a situational dimension that a satellite image just by itself cannot provide. So I’ve superimposed them onto Google Earth — you can download the resulting KMZ file (4.8 MB)to open in Google Earth. I’ve included both the July 4 and June 17 imagery, as well as the July 4 imagery of Kadugli town proper, which purports to show a collection of body bags. 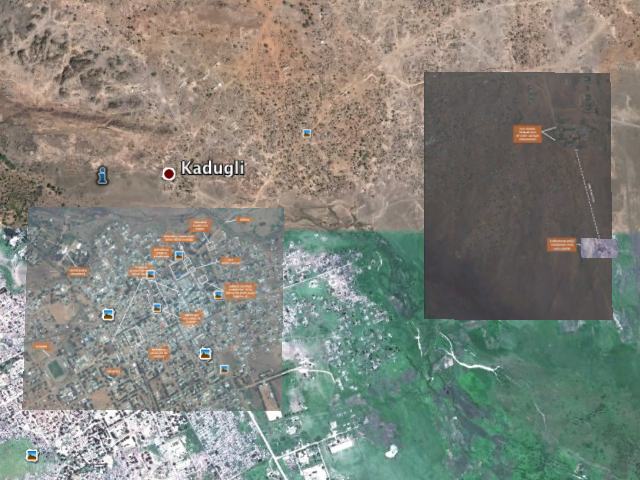 As always, I recommend toggling on and off the various layers, especially the June 17 one, to compare the imagery on different dates. The region straddles 2 different base imagery sets in Google Earth. To the north, the imagery was taken in August 2004, during what appears to be a drought. To the south, the imagery is from September 2009, and much greener. There is a seam between the two base images, with an error of perhaps 15 meters, making precise positioning of overlays impossible.

(Looking at the scattered huts near the purported mass graves on the July 4 imagery, it is remarkable how transient they are, with very few of them present both in 2011 and in the 2004 base imagery. Only the paths between the huts seem to show any permanence.)

Finally, a note on the limits of what satellite imagery can show: These images alas cannot prove a massacre occurred; they still allow the alleged perpetrators to claim plausible deniability, absent a fact-finding mission on the ground to Kadugli. But there is no doubt that such a fact-finding mission will one day take place, and that these areas will be re-excavated to look for bodies. In the meantime, any effort to hide evidence on this scale will be in vain, as satellites will no doubt keep a close eye on that one very suspect location. if there is one thing we’ve learned from Katyn to Srebrenica to Rwanda, is that mass graves don’t erase history — rather, they tend to focus the attention of history.