Check out the presentation the CIA released today laying out their claims that the Syrian reactor destroyed by an Israeli air strike on September 6, 2007 was in fact built with support from North Korea and was intended for the production of weapons-grade nuclear material. Below is the embedded full version of the footage, courtesy of the BBC. Note the use of a 3D display program that looks very similar to Google Earth, down to the textured 3D buildings: 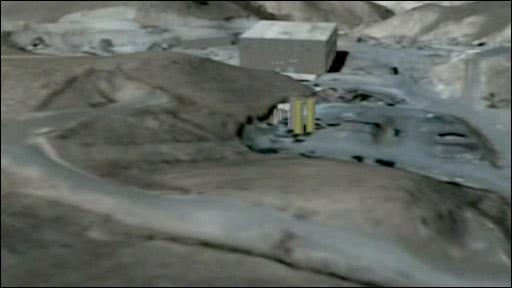 The CIA certainly pulled out all the multimedia stops to convince in this presentation. It is certainly a lot more explicit than the presentation by Colin Powell to the UN before the start of the Iraq War. I’m half hoping that they’ll also release the 3D model of the reactor from the presentation as a downloadable Collada KML file — just because that would be a really cool and innovative way to press their case.

What about the credibility of this presentation? Obviously, Syria and North Korea call it a fabrication, and given the damaged credibility of the CIA from their shenanigans in the runup to the Gulf War, those denials will convince many. But the BBC’s commentators appear convinced by the evidence.

This topic was previously blogged on Ogle Earth here, here, here and here. Download a KML overlay of before-and-after imagery here. The location is now also viewable in high resolution in Google Maps/Earth, as of the last update. You still get to see the reactor before it was destroyed, from a Digital Globe image taken on August 18, 2007: