It’s only January 3 and yet we may already have the year’s weirdest Google Earth story on our hands. When I first read the Kampala-based Weekly Observer‘s “Uganda: Google to Find Kabaka’s Land” I was convinced it was parody on par with the Onion. How else could you explain paragraphs like:

As the dispute between [Ugandan] President Museveni’s government and the Kingdom of Buganda over land heats up, the latter has hired leading Internet search company Google to “search and map” all the kingdom’s land in Buganda.

The Buganda kingdom is hoping to use Google to prove the Uganda government wrong. “We have decided to produce bwino [documentary evidence] concerning our land. With its search, mapping and satellite technologies, Google will be able to pinpoint Buganda’s land, and the government will not have any more excuses for not returning it,” a source close to the Kabaka [Buganda’s tribal king] told The Analyst.

“Google can even get you a picture of a mulalo [person originating from western Uganda] urinating on the Kabaka’s tree or a government official forging the kyapa [title] to the Kabaka’s land. So all that monkey business – with due respect to the Nkima clan – will be no more,” the Mengo [seat of the Buganda monarchy] source told The Analyst.

I googled ‘Buganda’, and soon found myself drawn into the fascinating world of local Ugandan politics. The article is legit! [See below] My sources for the following short primer are a Wikipedia article on Buganda and The Weekly Observer article “Uganda: Why Kabaka Refused to Meet Museveni” [not satire].

(But before we begin: There is actually a joke in that last quote, above. Nkima means ‘monkey’ in the local Luganda language, and the current Kabaka, Ronald Muwenda Mutebi II, is married to a member of the Nkima/Monkey clan.) 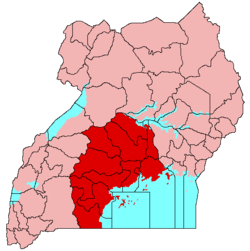 So: Uganda is comprised of several kingdoms, including Buganda (the red bit on the map), whose kings have no real power but do have the loyalty of their subjects, along clan lines. The central government of Uganda, headed by President Yoweri Museveni, has been wary of these allegiances as a potential threat to the unity of the state (Kenya being the current cautionary tale). Buganda’s king, the Kabaka, meanwhile suspects the central government is out to undermine his influence.

How might the central government go about this? The Kabaka is the largest landlord in Buganda. By amending the Land Act of 1998, which is what Museveni’s government is currently proposing to do, title holders would no longer be allowed to sell land without consulting its tenants. And if a landlord wants to sell it, tenants would get first right of refusal. According to The Weekly Observer, the government’s stated motivation for the amendment is that when deeds were first granted in 1900, they were not done so fairly. The proposal would tilt the playing field in favor of landless tenants. It is seen as a populist move.

The Kabaka is obviously not taking this lying down. He’s set up a “Land Committee” whose aim is to “sensitise” Bugandans to the implications of the land reform, and explain why it would be bad for Buganda. Apparently, herdsmen from Western Uganda have been migrating to Buganda, and they would be able to buy land via the first right of refusal. This would dilute Bugandan ownership of Bugandan land, which is upsetting to the Kabaka.

(It is far from clear to me who, if anyone, has the moral high ground here.)

But why is the Kabaka calling on Google? According to the article, the Ugandan government has insinuated that some of the Kabaka’s titles might be fake. The Kabaka, in response, claims the central government owes Buganda 9,000 square miles of land. And apparently, Google is going to find it for him. But will it make a difference? Well…

[Ugandan] Government spokesman, Mr. Mulundi, was however adamant that nothing Buganda did would change government’s position on land.

“They can bring Google or Giggle… The Uganda government will stick with the peasants who, quite honestly, don’t know what is going on,” he said.

Alas, I seriously doubt Google has decided to enter the territorial adjudication business, or that it is about to announce Google Earth Pro with a new “territorial adjudicator” feature. We can still wish for it, of course, as it would certainly make peace on Earth a whole lot easier. In any event, the adjudicator tool would be beta for ages, so all decisions would just be provisional:-)

The big picture: Kidding aside, Google is being ascribed powers in Ugandan civil society that are beginning to take on mythical qualities. It’s quite an astonishing window into the popular culture there, and the place Google has achieved in it. “Appealing to Google” has become a way of proclaiming one’s innocence or advertising a perceived injustice. The subtext is that Google knows the actual answer, somewhere — that’s omniscience of the kind more often ascribed to God as conventionally imagined.

[Update 2008-01-04: It is a satirical piece (see comments). The dispute is real, and the post above is accurate, save for the quotes from that Analyst column. And of course, the Kabaka did not hire Google. I’ve been had — congrats to the Analyst:-) Check out “Kabaka sets terms to meet Museveni” for more non-satirical context.]

4 thoughts on “Google Adjudicator: Coming soon to Uganda? (Er, No.)”