At the very top of my to-do list for travel destinations lies Afghanistan, but over 30 years of war there have made it hard to justify visiting in the pursuit of pleasure. So I get my fix vicariously — most recently in London, where the British Museum is hosting a traveling exhibition with treasure from the National Museum of Afghanistan in Kabul. (It previously traveled around the US.) The curators have focused on material from four different archeological sites, each with a distinct cultural identity — Tepe Fullol’s gold bowls from the third millenium BCE show Mesopotamian influence; Aï Khanum was a Greek city; Begram‘s hoard shows strong links with Ancient Rome and India; and Tillya Tepe‘s burial treasures from the 1st century CE show a strong nomadic culture. The result is a remarkable survey of Afghanistan’s pre-Islamic heritage. 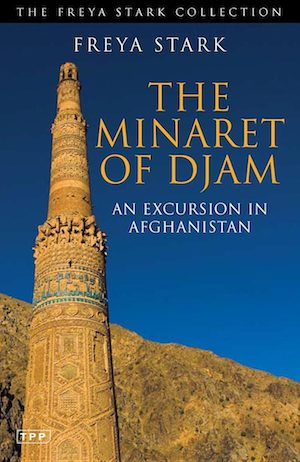 But it was in the gift shop that I made a serendipitous discovery — a travel diary by Freya Stark recounting her 1968 excursion by Land Rover straight through the mountainous heart of Afghanistan, from Kabul to Herat. “The Minaret of Djam — An Excursion in Afghanistan” had long been out of print, but was republished just a few months ago. I bought the book for two reasons: Because it is by Freya Stark, whose travel exploits are legendary; and because her destination is the Minaret of Jam (she spells it Djam) [Wikipedia], probably the most remote UNESCO World Heritage site and a long-time object of fascination for me.

The Minaret of Jam was built in steep, mountainous terrain in the late 12th century, at a brief and desolate opening of the gorges on the banks of the Hari Rud river. At 65 meters, it is still today the world’s second-tallest brick minaret, behind the 73-meter tall Qutb Minar in New Delhi, which is believed to have been inspired by the one in Jam and built specifically to surpass it. Both minarets were built by the Ghurid empire, and historians now suspect the Minaret of Jam is the only structure left standing at the location of Firuzkuh, or Turquoise Mountain, the fabled Ghurid summer capital destroyed by the Mongols in 1222 and lost to us ever since.

In an authoritative report on recent excavations at the Minaret of Jam in search of evidence tying it to Firuzkuh, David Thomas recounts how the wider world rediscovered this architectural gem:

In 1886, [Colonel Sir Thomas Holdich, the Superintendent of Frontier Surveys in British India,] published reports of a tall tower in central Afghanistan but it was not until 1943 that the minaret of Jam was ‘discovered’ by S. Abdullah Malikyar, the Governor of Herat, and A. Ali Kohzad published a report on it in Dari. A report in English followed in 1952 but the magnificent tower only received world attention in 1959, when Maricq announced the discovery in The Illustrated London News and suggested that its location was ancient Firuzkuh.

Nine years later, at the age of 75, Freya Stark set out westward from Kabul to see this minaret for herself. She and a few other seasoned travelers managed to drive their Land Rover Series IIA straight through this central massif, negotiating mountain passes, fjords and barely-there tracks to reach the minaret, and thereafter Herat.

Although there was very little road infrastructure then, the 1960s and 70s provided a rare window of opportunity for unfettered travel in Afghanistan — Herat and Kabul were major destinations along the Hippie trail. Stark’s encounters with Afghans on her excursion are wholly positive, with easy hospitality provided throughout. (It perhaps helps that she spoke Farsi, of which Afghans speak the Dari dialect). There is no inkling of the coming Soviet invasion in 1979, of the insurgencies of the Mujahideen and the Taliban, Al Qaeda’s presence, and finally, the NATO invasion in 2001.

As a counterpoint to Stark, it is worth reading Rory Stewart’s modern classic, “The Places in Between“. Stewart speaks Dari and is an Afghanistan expert, and yet his quest — to walk from Herat to Kabul via Jam in January 2002, through Taliban-controlled territory a few months after the NATO invasion — is brave bordering on the foolhardy. The landscapes he travels through are those which Stark visited 33 years earlier, but his descriptions above all convey desolation, desperation and a turning inward. Remarkably, he is often received hospitably on his trek.

Stark is generous with the minutiae of her trip. She records dates, places and distances, and offers up detailed descriptions of the landscape. For example:

A higher downland spread just above. A man who came to squat beside us while we ate, with a three-cornered Mongolian face and eyes as light as the mountain sky, told us that their center there is called Bâd-Asya, or Windmill; when we climbed to it we found three shops for a bazaar and a solidly built granary like those that Hadrian left along the Turkish coast for his armies, with the same government look about it though in a smaller way. A shambling lorry trundled off down an unlikely track, and half a dozen people sitting at leisure to watch it gave a city touch, since agricultural leisure never begins in the morning. The country to the south descended in slopes of light or shadow towards clefts that led to Ghazni or the Kabul valley far away. […]

We drove on, over a wide and lovely movement of heights, from one corn basin to another, jade-green and translucent in their own depth of shadow, and slung as if suspended between fox-coloured slopes. The dust-road rounded them with edges vague as smoke, transitory and perpetual as the centuries of forgotten hooves that had sodden and bruised it into the background of its hills; and suddenly, without any preparation, we found ourselves on the brow of a precipice that looked down on Helmand [river] escaping from its gorges. The river and a tributary met there, spitting white water and twisting like snakes surprised, and continued along an easier but still narrow valley journey, where a bridge at the bottom and the opposite zig-zags showed our way. [p.49]

Reading such passages, I began to suspect there might be sufficient information here to reconstruct her trip cartographically, using tools that the inhabitants of 1968 could not even imagine: Google Earth and geonames.org. It proved possible, but not easy. There were two main challenges:

First, in many places, the roads visible in Google Earth today had clearly not yet been built in 1968, so on several occasions we find Stark’s route veering away from the road which seems obvious to follow today. In the passage above, for example, they are on a track in the southern higher reaches of the Helmand river basin, because in 1968 there is no passable road directly beside the river. Today, there is.

Second, there is no common toponomy — Stark transliterates the names she hears in Dari from locals in one way, her maps transliterate them in another, and geonames.org does so in several more ways. (Google Earth’s own gazetteer is not usable in this particular region, with the few locations mentioned often off by many kilometers.) Fortunately, geonames.org has two very powerful tools: It has a KML network link for Google Earth that shows you its entries for your current view; and its website has a very robust fuzzy search function, with alternate names that more often than not nail what you’re looking for.

In the passage above, Stark hears the name “Bâd-Asya”, and writes it down according to her own rules for transliteration. geonames.org, however, lists “Sar-e Badah Siah”, where “Sar-e” denotes some kind of populated place. Sometimes, then, finding a location mentioned in the book took some creative reading of the candidates offered up by the network link as I roamed around the general area Stark would have traveled through.

Other techniques came in handy as well. Google Earth’s 3D perspective is especially useful in hilly landscapes like these, because it becomes s much easier to get a feel of the land, finding watersheds and mountain passes and seeing which valleys are flat enough for passage.

User-generated content was another useful tool for triangulating a location name. For example, on the first night, they camp at the edge of the Helmand river:

A hamlet of four houses was the centre of this small world, tucked at the foot of a promontory of rock and shale: Dané-Ausela they called it, but the map suggests Kizil-Bashi (Red-head) and the traveller can choose — as indeed he can with most of the smaller eastern names: the seldom agree with the maps, which never agree with each other.

Geonames was coming up empty, but then the Google Earth default photo layer provided the crucial hint, with a couple of rare Panoramio photos labeled “Dane-Awdela”. This in turn brought attention to a nearby Geonames place name: “Dahan-e ‘Abdullah“, a corroboration which in my mind confirms this as the place. There is no other name nearby remotely like it.

With techniques like this, I was able to map out the daily route of Stark’s expedition, from her departure in Kabul on August 8, 1968 to her arrival 8 days later in Herat. It’s available for download as a KMZ file, to be opened in Google Earth. The best way to use this tool is to buy the book and keep Google Earth alongside you as you read it. Doing so adds a whole new dimension to her travelogue.

I’m very confident about the accuracy of most of the map. In some parts, there is ambivalence about which specific route she took across a region, so I draw alternate paths. The route I am least sure about is the one she took on August 14. It begins and ends in the right places, but the path in between that fits with most of the evidence does not pass a certain nearby village she says they drove by. However, Stark refers to the village noncommittally as “a place which seems to be called Margha on the map”, so it’s possible that in this instance, she read the map wrong. In any case, the KMZ file comes with the Geonames network link included, so you can easily build your own theories. Any corrections or suggestions are welcome.

The above KMZ file contains some further “bonus” content. At the start of her book, Stark describes a visit to he Buddhas of Bamian, and I’ve marked up the relevant place names there. (Stark calls them “the huge, and lets face it, ugly Buddhas”, but is spared any regret she might have felt at her choice of words when the Taliban demolish the Buddhas in 2001 — She died in 1993, a centenarian.) She also mentions the northern cities of Balkh, Tashkurgan and Kunduz, and a series of passes. I’ve marked those up as well.

Finally, I have also added the locations of the sites whose treasures are in the Afghanistan exhibition currently on show in London. Tepe Fullol in particular is an obscure, out-of-the-way site.

I will admit that I have on occasion lurked on Lonely Planet’s Thorn Tree travel forum, looking for safety information on the Kabul-Jam-Herat trip. The advice varies by year. In 2007, it was deemed safe to travel from Herat to Jam. In 2010, not so much. Places like Panjau also seem to have changed in character. When Stark passed by it was “a miniature village-town with some signs of coquetry about it”. By 2010, one seasoned traveler described it as “a s**t-hole filled with yucking yokels, only worth getting out of.”

Let’s hope Afghanistan will be over its troubles by 2018, the 50th anniversary of Freya Stark’s excursion. Perhaps then would be an opportune time to retrace her trip. The research has been done. Who’s in?